skip to main | skip to sidebar

Ubuntu 9.04 has just been released. I tested the live session and I was happy with it. So I decided to install it to the harddisk. The installation was very smooth on my Acer M1641 desktop, just like the 8.10 version. The only thing I needed to do was to use the Nvidia proprietary driver instead of the open-source Xorg driver in order to get the full resolution since the open source driver does not support my NForce620i/GeForce7100 well enough.

The first improvement is that the bootup time is quite fast. The second thing is that desktop effects are automatically enabled. Since I do not normally use compiz-fusion, I disabled it.

Then I installed various packages I use (cvs, svn, git, various development related packages, hmm, I am not a developer but I need them to build the packages) and thanks to the fast mirror in Singapore and my 8MB cable modem connection, the process was painless.

I was having problem accessing a share folder from the other XP notebook with my Ubuntu 8.10 installation. 9.04 has no problems accessing that. Unfortunately I still had some performance problem when copying big file under Gnome from the XP share. I had the same problem with my Arch installation. It is about 2-2.2MB/sec. I was getting about 7MB/sec with Fedora 10 under Gnome. This is something to solve later.

Updated on 26-April-2009: Problem Solved. It turns out that the XP notebook has both wireless and wired connection. Taking out the wireless connection and I have now 8.8MB/sec under Gnome and 8.2MB/sec under KDE for Ubuntu 9.04.

Overall the first impression is positive even though there are not really much excitement to mention about. I did notice the new notify-osd feature but I am already running it under Ubuntu 8.10. Running Gnome with Ubuntu is always smooth for me. I have used Ubuntu since 5.04 (April 2005). So far my experiences with Gnome under Ubuntu is quite good.

On the hardware side, the only device not supported is my old analog PCI TV card Compro Videomate X50. It is not supported by v4l (Video for Linux). Anyway, I seldom use it (it works under Vista). But still I decided to blacklist it to shorten the log message.

As for the bundled packages, one of the missing package is ibus-pinyin. Without it, it is not so useful for me to input Chinese. Anyway the version bundled is also an old version, so I will build from the source directly. I like ibus better than scim.

For people who want to use PIC or AVR development, Ubuntu has the packages like gputils/sdcc/piklab and avr-gcc/avrdude. But in general, Ubuntu's built-in version are all a bit too old. So it is better to get the latest released version or even the latest version from cvs/svn/git. 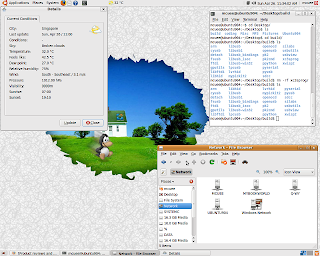 Xiaofan
I am an electronics engineer working in the industrial automation sector.